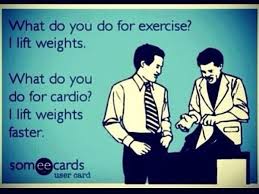 I should be up front with you here: Crossfit is for fanatics. Yep. Those people who love to love things. The ones who read quotes and take everything to extremes.

There’s a quote from the TV show House that I dearly love (because it pretty much sums up my approach to life… you know, minus the drugs). Wilson (House’s best friend) gets up early one morning to find House in his kitchen cooking (shortly after House gets out of rehab) and they have this conversation:

Wilson: It’s a little early. Did you even go to bed last night?
House: Bed is for sissies. …
Wilson: Doesn’t this seem a little bit obsessive?
House: …What do you expect? I’m an addict. I turn everything up to eleven.
Wilson: Yeah, I thought you were trying to tone that down.
House: No. I was trying to find something I could set at eleven without blowing out my eardrums. …

That’s basically Crossfit. It’s the crack of exercise. It’s generally practiced in these little renegade gyms called “boxes”. No treadmills here. The only machine is a rower. Everything else is weights, pull up bars, maybe some ropes. You go to classes. If you’re at a good gym, there won’t be more than 12 or so people in your class. My gym, TwinTown Crossfit, limits things to 9.

A coach puts you through a workout that usually consists of a warmup, a skill (either an olympic lift or something gymnastics-inspired), and a “WOD” (workout of the day). For example, today I went to class and we did a running warmup, some mobility work (fancy stretching), worked on something called toes to bar (harder than it sounds, check out this video:), and then did our WOD, which was 75 power snatches for time with a 55 lbs weight (for girls).

WODs are often named either after girls (“the girls”) or after guys w ho were soldiers/cops/etc. who were injured or died in the line (“hero WODS”). 75 snatches for time is called “Randy.” Here’s a pretty sweet video of an LAPD SWAT team doing the WOD as their last drill of the day.

There are many things I love about Crossfit, but my top 5 are probably:

Even Bob Harper loves it. He called it the hardest workout he’d ever done in this Huffington Post article. Which may or may not be a point in Crossfit’s favor, depending on how you feel about Bob Harper. Personally, I think he seems like a nice enough guy. But I wouldn’t generally pick my workout system based on his recommendation. But maybe you’re into that whole nice guys with tattoos and eight packs kind of thing. Wait a minute…

Anyway, if you’re interested in Crossfit, there’s a good chance there’s an affiliate (e.g. a Crossfit gym) near you. Most of them have intro classes either in small groups or one-on-one with a coach where you can figure out if it’s for you. Good luck!

Also, you should come back tomorrow because I have a special surprise for you. I know, I know… you’re thinking “three posts in three days? After three weeks of nothing?” Yep. And it’ll actually be four posts in four days. Because the surprise is a TWO DAY surprise. You should probably get extra sleep tonight to prepare…